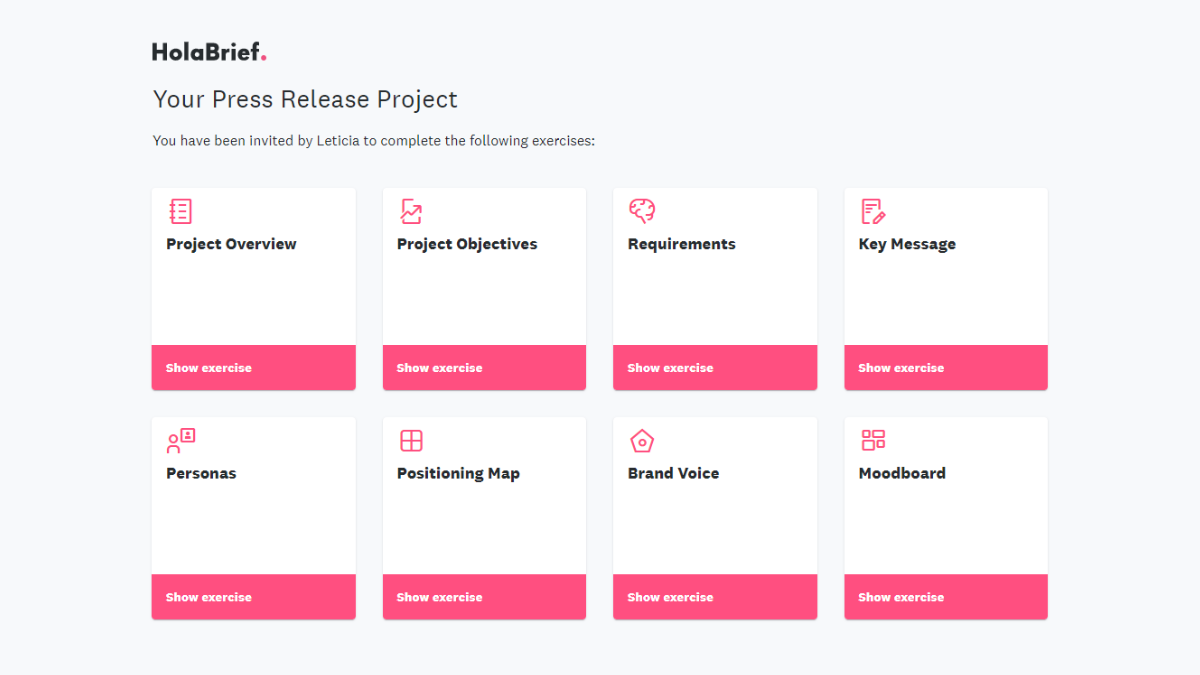 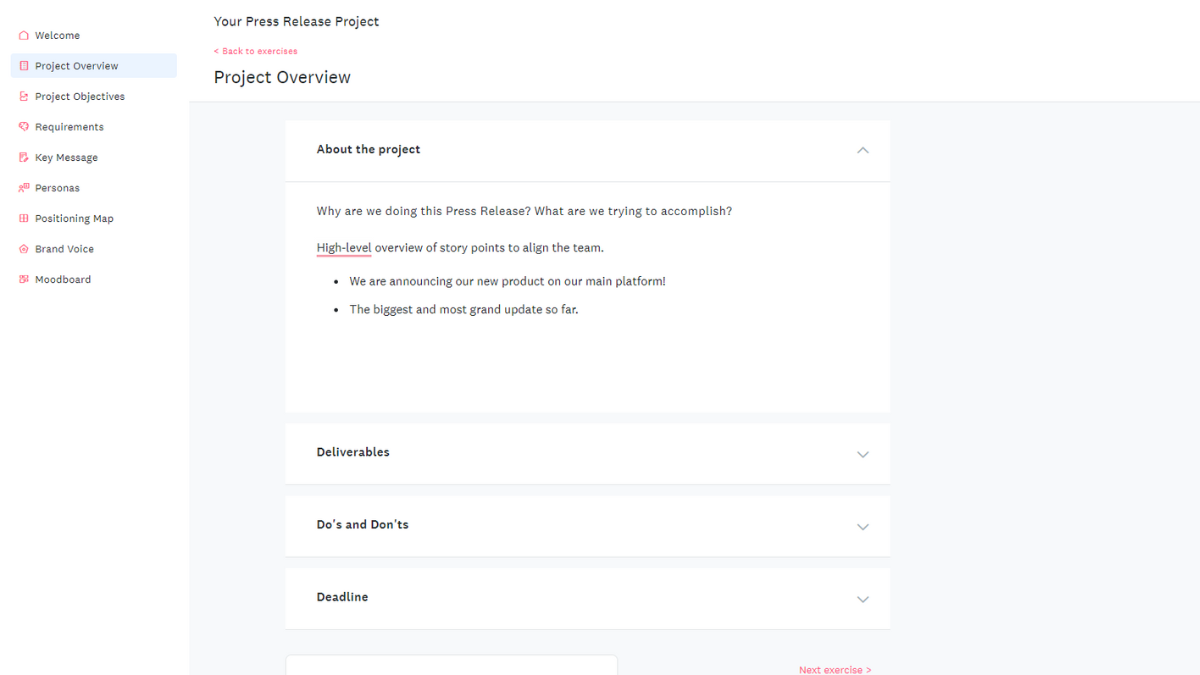 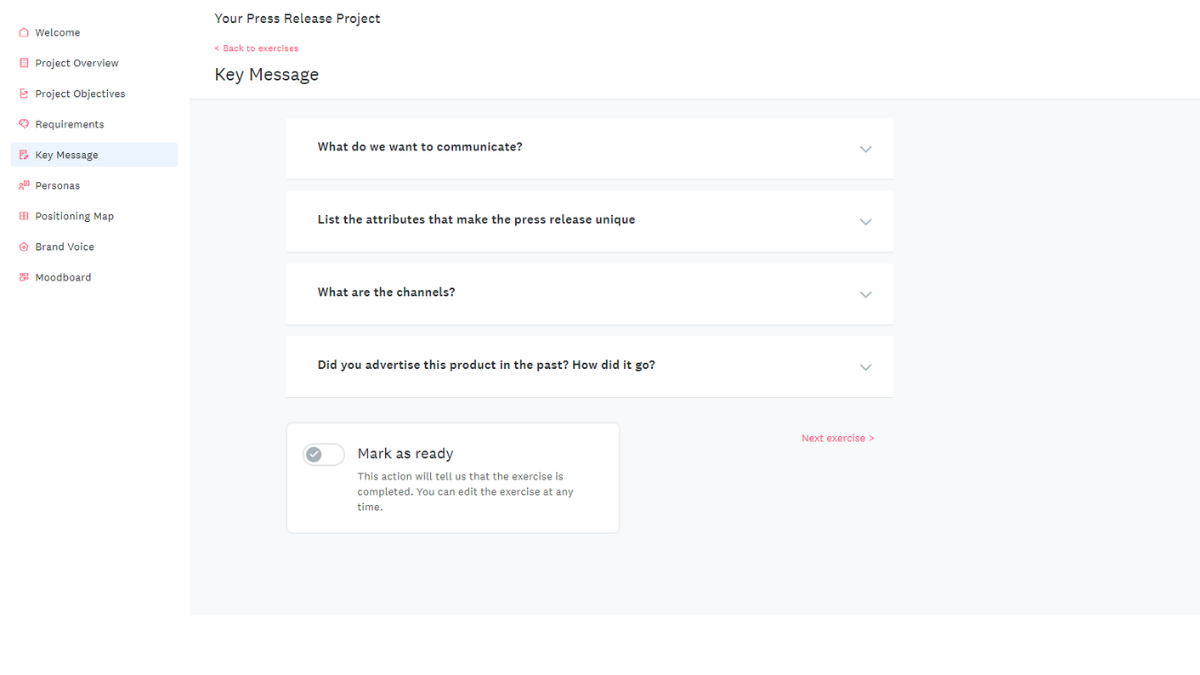 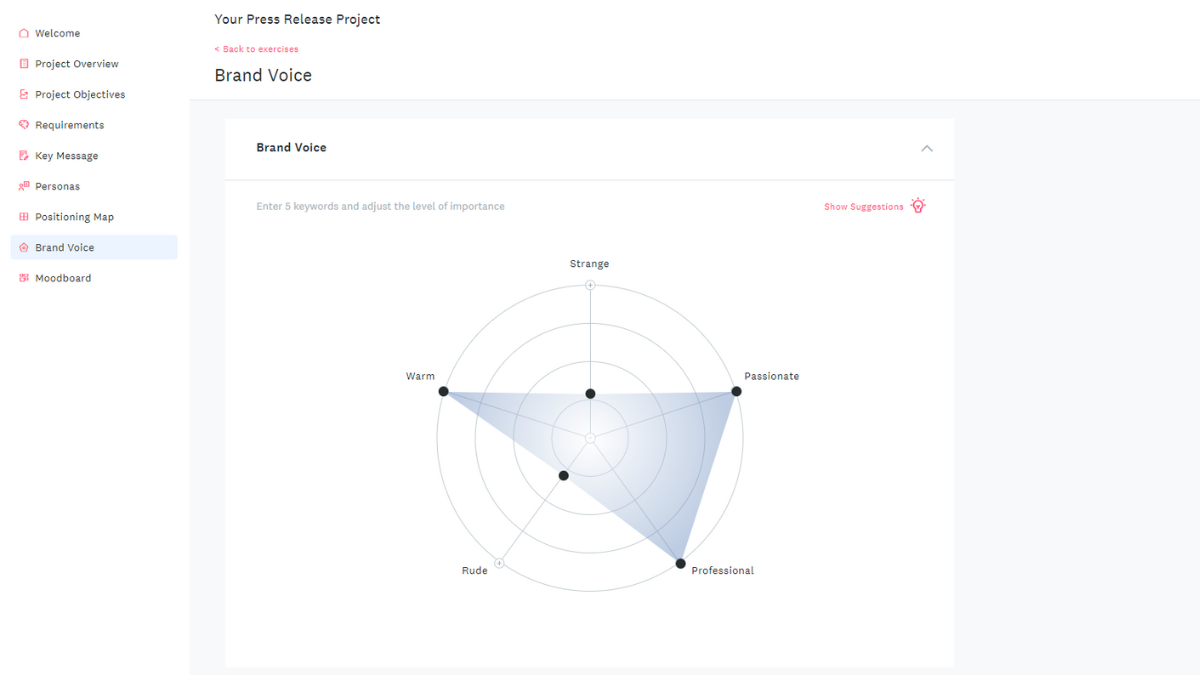 The first stage in the process of drafting an efficient press release is to create a brief that is clearly stated. If the editors have a detailed and well-organized brief, it will be easier for them to write a credible press release. Discover how to write one in this article or use our proven template by clicking the “Use Template” button.

What is a Press Brief?

The drafting and dissemination of press releases are among the most basic aspects of all marketing and public relations tools. Companies of varying sizes and sorts use press releases to communicate their messages to specific audiences through various media venues.

It doesn't matter if it's an announcement, a fresh launch, or a merger and acquisition, journalists can be provided with information about a company or personal brand's current condition, as well as changes or improvements in the products and services they offer, through press releases.

A press release is an official statement (either written or recorded) that an organization issues to the news media and other audiences beyond the scope of the organization. Therefore, a press release brief is a document provided by the company to the media organization that contains all the necessary information to build an effective press release.

Press releases are one method you may use to exert more influence over the story people tell about your company. A consistent cadence of significant news can help a company stand out from the competition and create mindshare with journalists over time. And what better way to start this impactful project than with a brief.

When your brand's audience reads about the initiatives it has taken on the news, they tend to relate to you and consider your brand to be one of a kind. This, in turn, draws lots of focus on the reasons why your brand should be chosen over other brands in the market that are comparable to it.

For example, you may contact the media and develop relationships with key newspapers more easily with the assistance of product press briefs. Your company will become a well-known figure in the media as a result, which will open up opportunities for developing relationships with investors. If you can't believe it, this is one of the most important reasons you shouldn't resist the impulse to release a press release immediately.

In this day and age, it is absolutely necessary for a company to have an online presence; in fact, it is one of the musts. Writing an effective press release is impossible without first developing a thorough press release brief and putting everybody on the same page.

How to Write a Press Release Brief? A Tested Outline

No matter how competent an editor is, the impact of a press release will be restricted unless it is founded on a brief that is succinct and presented in a way that is easy to understand. On the other hand, if the press release is disseminated at the incorrect time or through the incorrect channels, it will fail to have the effect that was intended, even if a competent journalist wrote it. Therefore, to secure the best possible outcome, it is necessary to include these 5 sections:

The editors who will be tasked with creating the body of your press release can most benefit from having access to a brief because it will direct and support them in their work. The entire narrative should be summarised in a good brief, from the beginning to the end. Accordingly, in order to enrich the wording of your press release, you should make an effort to offer particular facts (who, what, when, where, why, and how). If your press release is about an upcoming event, for instance, you should be sure to include all the pertinent facts, such as the event's location, the anticipated attendee's list, and so on.

It should be no surprise that a press release's purpose is to disseminate news and generate interest in the brand. However, it will be beneficial if the goals and expectations are clearly and concisely outlined. Do you have certain customers or possible investors in mind while writing this news release, and do you hope to attract their attention? Alternatively, are you attempting to raise people's consciousness or win support for a particular cause? All of these elements are necessary for the formation of a coherent narrative.

In order to determine the objectives, you need to ask yourself these three questions: Which goals are we working toward accomplishing here? What are the most important aspects of achieving those goals? Are there any approaches you can recommend for successfully achieving the goal?

You can include this and more in the HolaBrief Press Release Brief template for Free! Create an account here

When writing a brief, you should highlight the most important takeaways from your press release in just a few phrases. In this case, bullet points might be helpful. This will assist the editors in remaining focused on the topic at hand as well as assisting them in developing an attention-grabbing title.

Your press release's success will depend on the headline you choose, just as it will depend on the title you choose for your blog post. You only have one line to work with, which can be intimidating, but you need to consider your word choice to create an attention-grabbing headline. Make it fascinating first and foremost: Keep in mind that reporters receive dozens, if not hundreds, of releases each day; as a result, you should invest the time to develop a great headline, as it will transmit the most vital information.

A top-performing press release must incorporate data unique to the publication to achieve the highest possible level of media coverage. Keep in mind that editors and journalists enjoy reading news articles that contain numbers and figures since they help to flesh out the story. In light of this, you should make it a point to include all pertinent data and figures and any significant milestones in the press release. Don't leave out the citation for the source!

You also need to describe the voice utilized in the press release to give the editors an accurate picture of how to format it. A solid press release will have a factual tone, be brief and to the point, and convey to the writer the most important aspects of the story. If they require any additional information, they will contact you. Your article is better understood if the news material is accurate, and you write in the style of the publication to which it will be submitted.

In the same way that Rome wasn't constructed in a single day, your press release will go through several stages before it is finally ready to be distributed. Your team will have a road plan to follow if you create milestones and assign dates to them. This will keep them motivated and increase their level of productivity. On the other hand, if you are working with a customer, you may set up feedback meetings to give them the opportunity to offer their ideas regarding the path the press release should take.

In the end, each project's deliverables need to be specified. The term "deliverables" refers to all of the outputs, whether tangible or intangible, that are handed in as part of the parameters of a project. Even though the word may at first cause one to think of the final outputs that are handed in after a project, it refers to any output linked to the project that is handed in throughout any of the phases of the project.

Build and Download your own Media Briefing Samples in HolaBrief

After going through the steps outlined in this article, you canindependently compose a media briefing document starting from scratch. You areaware of the qualities that constitute effective briefs, as well as thesections of the document that should never be omitted. However, despite all ofthis information, it may still feel overwhelming sometimes.

Because of this, we decided to build HolaBrief, a briefing platform thatenables you and your team to generate briefs that have a professionalappearance while also making collaboration between brands and influencerseasier than it has ever been.

You only need to register for a free account, select our Press ReleaseBrief template, and customize it to meet your specific requirements. You shouldbe able to generate a brief that can be shared for your upcoming marketingcampaign with only a few clicks. We'll see you inside.

Build your own creative briefs and collect your clients' responses fast with HolaBrief! 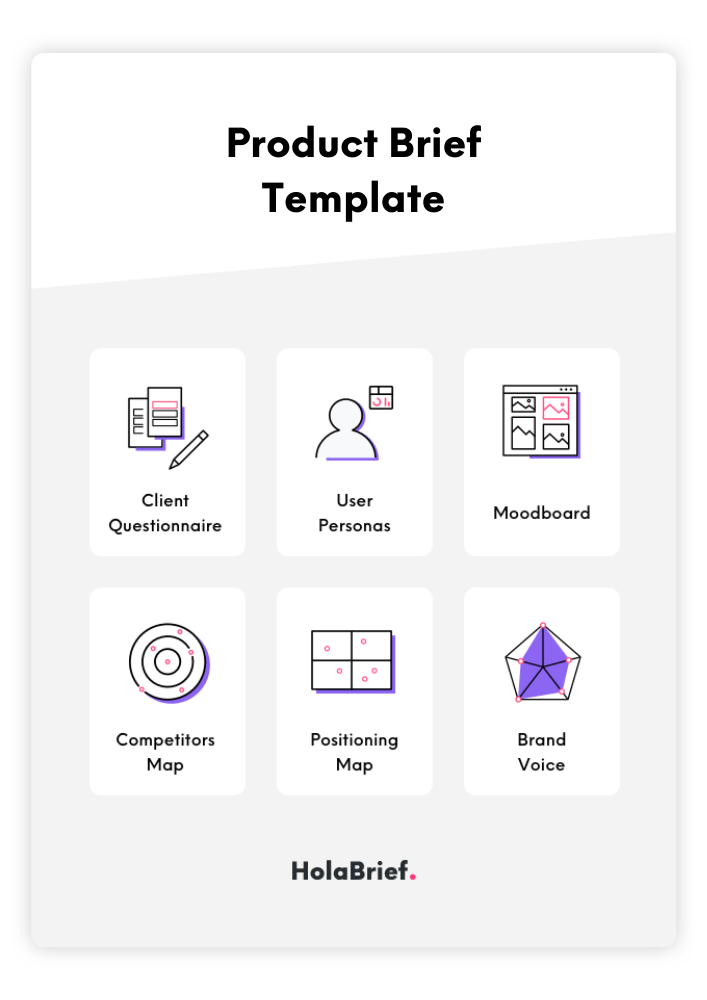 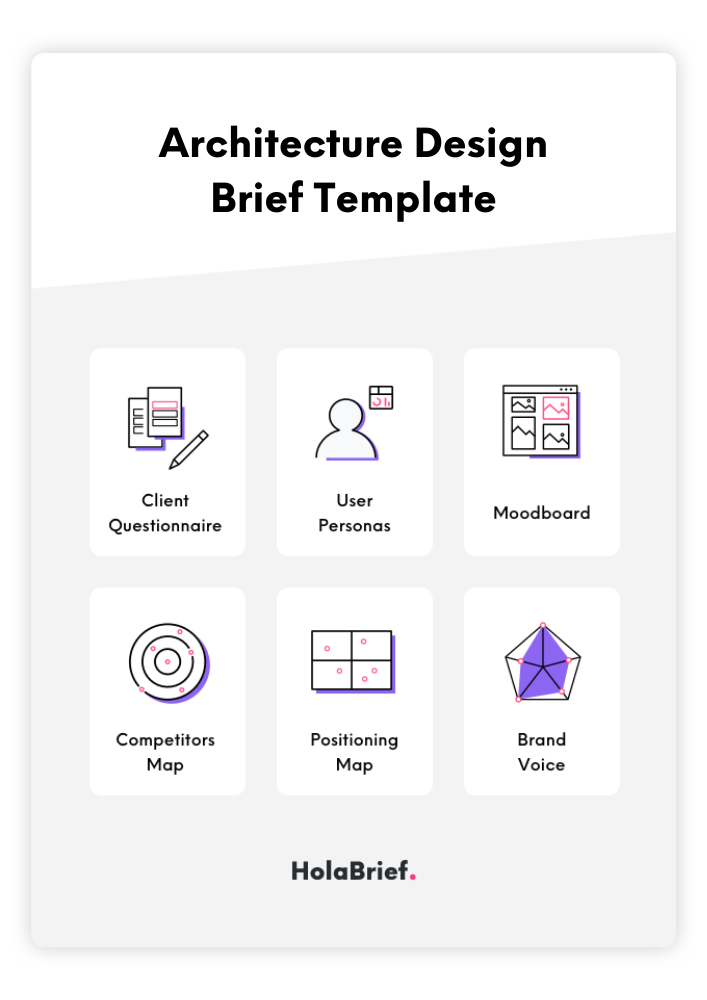 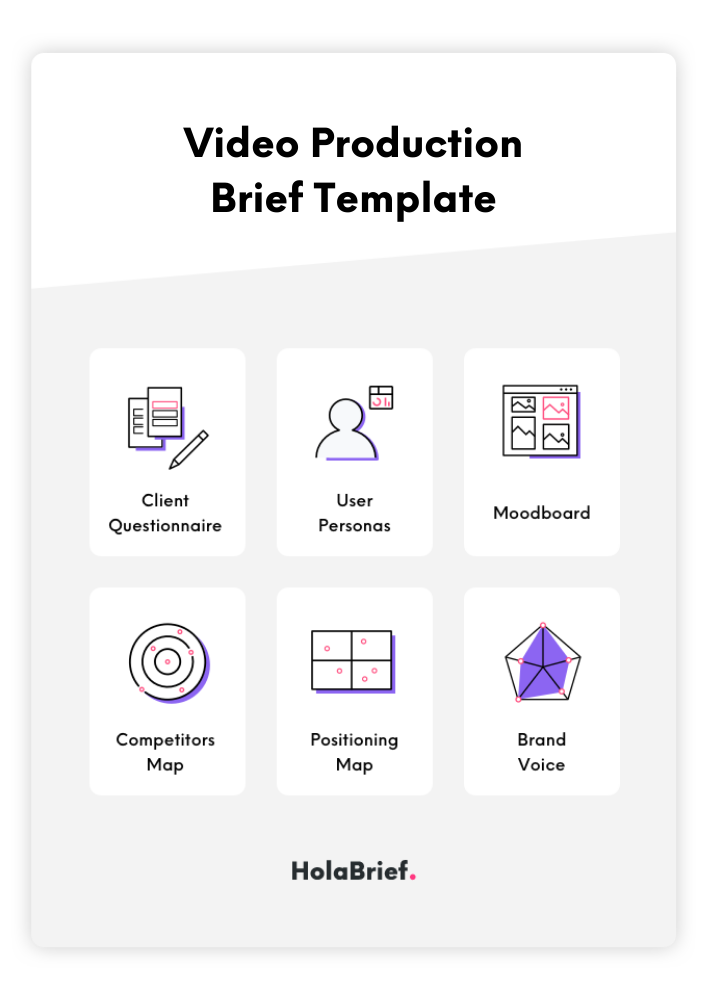 Join 1000s of agencies using HolaBrief to set up their projects for success.
Try for free

Join 1000s of agencies using HolaBrief to set up their projects for success.
Try it free